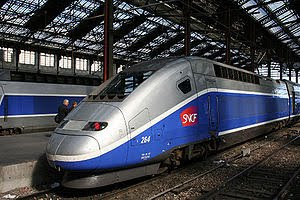 I regularly travel back and forth between France and the UK and have never had any problems (apart from the Ryanair cabin-crew’s non-stop attempts to sell me tepid pizza, over-priced perfume and ’smokeless’ cigarettes), until last week. Due to UK commitments I was doing a Monday - Friday trip so despite the fact that a General Strike was announced for the Tuesday I thought I would be fine. Stupid me! We landed early at Carcassonne (to the usual fanfare of tinny Ryanair trumpets) and I was in plenty of time to catch the 3pm train - if it had existed. The ticket machine then managed to sell me a ticket for the next train, even though that one had also been cancelled. Then, as if by magic, they announced that the train from Toulouse was finally arriving after a 45 minute delay. Me and possibly 200 other travellers decided that this was our only chance out of Carcassonne so we all piled on. I’m sure I have read somewhere that reservations are compulsory on French trains and that standing is prohibited but nobody else seemed aware of this and the aisles & corridors were so blocked that there was little chance of a guard complaining. I managed to extricate myself from the mass of humanity, dogs & suitcases and got off at Narbonne, knowing that the next train to Perpignan was not for 1 hour - but there it was on the other side of the platform just waiting for us! I arrived home in plenty of time to get ready and go out for dinner with clients, and felt extremely smug that I had somehow managed to beat the system. This smugness lasted until Friday…..

…. Friday morning at 7am I arrived at Perpignan station optimistically clutching my train ticket for the journey to Carcassonne, via Narbonne again. I had checked the newspaper and the internet the day before and SNCF was confident that there would be ’No Perturbations’ to the circulation. One glance at the departure information board made me very perturbed indeed. Yet again, my train did not exist - and if I missed my connection in Narbonne I would miss my flight. The only train leaving anytime soon was a sleek & shiny TGV heading off to Paris (via Narbonne!). I sneaked on, reasoning that as there were no stops until Narbonne, I could hardly be thrown off, and with a bit of luck, the guards would be on strike too. I made it to Narbonne station and there my luck ran out - the departure board was a disaster zone showing that no local trains were running. They had helpfully put on a couple of buses as an alternative but only at 4 hourly intervals and I needed to be at the airport within 2 hours. How I managed not to cry as I handed a taxi driver 110 euros to drive me 30 minutes up the auto route I will never know.
Posted by Caroline at 08:40 No comments: