At 11.30am last Wednesday I was just leaving a client’s house when my partner telephoned  – “Hello it’s me.  Are you far away?  I’ve fallen.  Can you pick me up from the Doctor’s surgery?”  He didn’t go into any more detail so I guessed that there was something pretty serious going on – and I was right.  I arrived at the surgery at the same time as the Samu ambulance and the Pompiers (normal in France) and found him lying on an examination table with scrapes all down one side, a very painful foot, and in considerable pain.  He had lost control of his scooter and fallen off into a ditch, and had then been rescued by 2 old men who managed to drag him into their car and into the surgery, which just happens to be very close by.

It was pretty obvious he would need X-rays and have the ‘scrapes’ patched up which would take some time so I waved him off in the ambulance and went to deal with the practicalities of the situation - going home to let the dogs out, making myself a snack and then trying to track down the scooter. 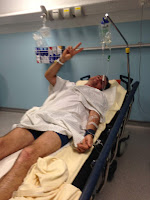 I turned up at the hospital at 3ish with sandwiches, drinks, a walking stick and some undamaged clothes, expecting to be able to bring him home. Wrong. He was in a ‘treatment’ room with dressings on his ankle/hip/elbow/shoulder and had two drips plugged in.  Every now and then a doctor or a nurse would come in and either do a blood test or recommend another X-ray, but apart from that, there was not a lot of ‘treatment’.  At 5pm he was wheeled into the corridor to join a queue of people on trollies waiting for scans or X-rays and then there was a complete ‘lull’ as, I assume, the staff went off for their evening break.  At 8pm he, and several others, decided to form a mass break-out and managed to persuade a terrified passing orderly to remove their drips.  We found a wheel-chair and started moving towards the exit – but unfortunately had to pass through a ‘Discharge’ office where a dragon lady persuaded us that we would receive no results or reports unless the doctor had signed the papers.

At 9.30pm a group of us were standing in the corridor outside the Doctor’s office, chatting about how long the waiting time had been and how things had changed for the worse, when a furious Doctor suddenly appeared and absolutely blew his top in true Basil Fawlty fashion, shouting that our comments were not helpful, we had no right to criticise the system and that if we were that concerned we should go and join the Yellow Jacket protestors.  (I must point out that despite the fact that I use the word ‘we’, I’m English so had naturally been sitting quietly on a chair around the corner pretending not to be any part of the madness).   After a very heated debate the Doctor calmed down and when he explained that they were extremely short-staffed, they only had half the number of doctors required, and that he was already 10 hours into a 14 hour shift everybody sympathised with him and patted him on the back and wished him ‘bon courage’ etc.

Once we were all friends again things moved pretty quickly – the Doctor wheeled my partner into another room, explained that he had broken a bone in his foot and badly sprained his ankle.  He was then put in a temporary plaster and then we left, clutching pages of prescriptions for pain-killers, injections, follow-up visit appointments and crutches. 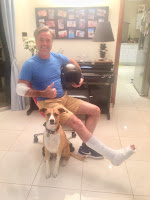 Obviously I am very thankful as it could have been a lot worse (the injuries, not the visit to A&E) but having previously written a lot of positive comments about the French health system, it saddens me to see how bad the situation has become.

Posted by Caroline at 08:22 No comments: