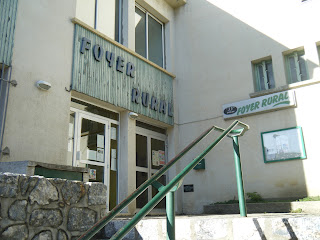 Many people who dream of moving to france talk of wanting to live in a village where they can integrate, make friends and become part of the community.  It can definitely be done and I have just experienced the sort of weekend which proves it:

On Friday evening I experienced my first “Ceremonie des Voeux du Nouvel An”.  This is an annual event held in the village hall to welcome the new inhabitants and the new babies.  There are now 1100 inhabitants of this village and it seemed that everybody had turned up.  The Mayor gave one of the longest ‘short’ speeches I have ever heard, accompanied by a powerpoint presentation on a large screen behind him, outlining their spending budget for the forthcoming year and showing photos of last year’s purchases – the highlight of which appeared to be a shiny new street sweeping machine. The majority of the audience managed to stay awake, mainly thanks to the small children hurtling around the room and the screams of disgruntled babies.  There was then a roll-call of all the new babies and they (and their parents!) were invited up on stage and presented with a young olive tree to be planted in their gardens – a lovely gesture I thought.  We all then applauded and the babies, startled by the noise, burst into tears again.  The Mayor then announced that the meeting would be concluded with an ‘apero’ and within seconds we had all stacked our chairs, tables were laid out with quiches, cakes, sweets and wine – and within nano-seconds the elderly widows of the village began filling their faces and handbags with as much as they could carry!  I started talking to a gentleman who had been introduced as one of the new inhabitants of the village, who just happens to be English too, but before we had a chance to chat we were inundated with locals who were fascinated to talk to us and all wanting to try out their version of English – and I left with an invitation to visit an elderly  couple who want to practice their language skills.

On Saturday afternoon I went for a walk in the vineyards with my neighbour – a lovely lady who manages to look ‘chic’ even dressed in walking boots.  The word ‘walk’ may be a bit of an exaggeration as we spent most of the time sitting on a grassy bank on the corner of the vineyard enjoying the sunshine and chatting – much to the dog’s frustration.  We went back to her house for tea with her husband and I had my first experience of the Galette des Rois.  This is a cake made of puff pastry with a frangipane filling and is a tradition for Epiphany – it contains a small ‘favour’ and whoever gets the slice with the favour in it is King or Queen for the day and gets to wear the paper crown that is sold with the cake.  Sadly/luckily none of us won that day but there was plenty of Galette left and I keep expecting to see JC or Francoise wearing a crown in their garden one day.

And finally, on Sunday morning the dog and I were on our usual ten minute stroll to the village to buy the bread and we fell into step beside a lady who was also on her way there and although it was only a short trip, by the time we reached the bakery we had exchanged life stories.  We stopped off at her house on the way back (which just happens to be for sale) and she showed me all around it and even offered to look after the dog if ever I needed help.  During our conversation I mentioned how pleased I was that everybody in the village seemed so friendly and that I had been a bit nervous about moving to such a Catalan village as they might not have welcomed English people and she mentioned that actually she thought there was another English couple who lived just up the road and she had heard that they were nice; I was baffled at first and we went through the list of who lived in the houses further along and then I realised, she was talking about my husband and me!
Posted by Caroline at 02:28 No comments:

Winter in the South of France 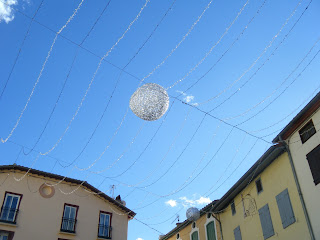 People often ask me what’s the weather like here in winter and it is hard not to sound smug but the obvious answer is “Sunny”.  The Languedoc boasts over 300 days of sunshine per year and checking that you have your sunglasses with you when you leave the house is as natural as carrying an umbrella in the UK.

Talking of rain; it doesn’t very much and when it does rain it seems to be during the night – seriously!  Having said that, this year we have had a couple of very bad days of rainstorms where there were flood alerts but occasions like this are very rare.  You might notice when walking around the towns that the drainpipes on buildings empty directly onto the pavements rather than into drains – definitely not designed for practical use! 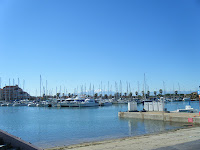 The Mediterranean climate is very similar to the people who live here – gentle & easy to live with.  Winters are mild and the summers are pleasantly warm – although there are exceptions.  I have just looked up some ‘average’ temperatures and I see that January should be around 12 degrees (today it was 22 degrees on our terrace), and last August we had a ferocious heatwave where temperatures hit the high thirties rather than the 28 degree average temperature suggested. 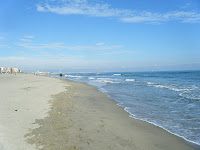 The small price we have to pay for this wonderful climate is that we occasionally have to endure the Tramontane Wind.  This is a strong, chilly wind that comes from the North-West and can gust up to 100kmh.  There seems to be no rhyme or reason for why it starts and every elderly resident here has a different theory on how long it will last (5 days is my longest experience) but one thing is for sure – it blows away any threatening looking clouds in the winter and makes the summer heat bearable. 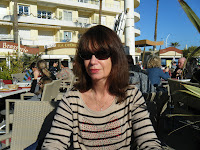 Today is January 5th and the sun has been shining all day and the sky is a brilliant blue. We have been for a long walk on an almost deserted beach, had lunch sitting outside at a restaurant, and relaxed on our terrace at home soaking up the afternoon sunshine. How is the weather with you.....?!
Posted by Caroline at 08:59 2 comments: