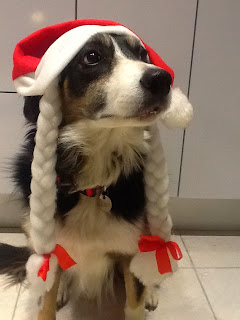 Just a very short but seasonal blog as I am in the middle of writing my Christmas Cards (yes I realise it is a tiny bit late so for those of you who are hoping to receive a card from me before the 25th, please consider yourselves wished a ‘Happy Christmas’!)  I blame ‘the french’ for the fact my cards are late this year, as exchanging Christmas Cards is not high on their agenda so the choice of cards  (and the price and the quality) leaves much to be desired.  Also, unsurprisingly, they are in French – which my UK friends and relatives would find confusing, if not pretentious.  So I decided to order some online.  Then I got side-tracked by the ones you can put a photo on.  Then I had to go and buy a Santa Hat and by the time I had persuaded the dog to pose nicely (the hat was for her, not me) and worked out how to upload the photo, it was 8th December.

Turning my attention to presents I decided to chain myself to the computer and spend the evening on the Amazon site.  I was doing exceptionally well, arranging for some items to be gift wrapped and some to have different delivery addresses and I was also taking the advice of Health and Safety gurus by taking regular breaks from the screen so as to avoid back-ache and eye-strain.  Unfortunately these breaks seemed to involve trips to the kitchen to refill my wine glass so it should have come as no surprise when I finally clicked to view my ‘shopping basket’ to find that everything was due to be delivered to my Aunt in Dorset!

This year, now that I am working at Beautiful South, I get to experience an ‘office’ Christmas – although this one is perhaps slightly different as two of us are English and the other two are French.  Anna and I started the festivities by bringing in Christmas cards for everybody – which were received with great joy and much kissing and hugging and then a discussion about what a ‘warm and lovely English tradition this is’ and ‘what a shame it is not so popular in France’!  So no cards from them!  The Secret Santa idea went down much better – they loved the concept of choosing a name from a hat and anonymously giving a 5€ present.  This morning we all arrived clutching our gifts and dropped them into a large bag in the kitchen  Just before Anna brought the bag out to distribute the presents she double checked that ‘nobody has put who they are from’ have they’?  ‘No’ they replied ‘nor who it is to’.  Cue more explanations and a frantic dash to the kitchen with pens by Les French!  But it was a great success and I love my leopard-print scarf and would have had no idea who it was from had Eve not been wearing the exact same one as she left the office later....!

Unlike the French, who do not even appear to have a translation for ‘Boxing Day’ I will be taking a proper holiday so, see you next year and have a very Happy Christmas!
Posted by Caroline at 10:57 No comments: