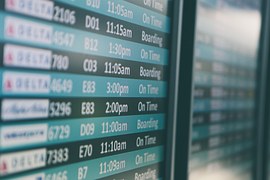 Perpignan airport was always a bit like a favourite elderly relative that you looked on it with affection, while accepting their faults.  It has been described as ‘a little scruffy and quirky’ – and that was a compliment!   While they are pretty good at getting planes to arrive and depart on time, they appeared to have given to thought to the well-being and onward travel plans of the passengers.   For instance, there was no official airport shuttle bus (you had to know the timetable of the Line7 Cabestany bus which would then drop you off at Place Catalogne in town, 1km from the bus and train station), there were never enough staff at the car hire desks (even if they were miraculously open at the same time that a flight arrived), and there were no tourist information boards –no pretty pictures showing what to do in the region and no advice on how to get there (or even how to leave the airport!)

Happily the airport is now having a facelift and it appears to be major surgery as the process has been going on for years.  At it's worst, the check-in area was a building site with plastic sheeting stapled to the walls, festoons of electrical wiring hanging from the ceiling,  loos located in a portakabin in the car-park, and the ‘shop’ no longer existed.  There was dust and noise everywhere and the only clean thing was the sign apologising for the fact that there were no loos in the ‘departure lounge’.  I use the inverted commas because one would need an excellent imagination to call an overheated cupboard with 17 chairs and a broken vending machine a ‘lounge’.

On Saturday I went to the airport for the first time in ages and was very nearly pleasantly surprised.  The Check-in hall is looking good with a smart cafe and shop area, there are shiny new toilets (with lift access) downstairs, and the car park is now sheltered with solar panel roofing.   I have no idea whether the Departure lounge area is fully functional yet but it seems highly unlikely as passengers have to present their passports at a desk in the corner of the hall and then disappear into a building site.  The Arrivals area is still very much a ‘work in progress’ and you have to wait outside at the far right of the building (next to two portakabins which house Avis and Hertz).   Not pleasant on the few days it rains here, and it will be even worse in the blazing heat of summer…

I am sure it will be lovely when it is finished (hopefully in my lifetime) but so far they appear to have forgotten something very important – Passenger Information.  I was there to meet somebody off the Stanstead flight due at 3pm and it was only by word of mouth that I found out from other people waiting that it was delayed by 15 minutes. We went to watch it arrive but to our dismay it didn’t land but continued overhead, raised it’s landing gear and flew off towards the sea.  As the only information screen in the building was advertising a ‘coffee and croissant’ deal at the restaurant, we could only guess at whether it was too windy to land, or whether there was a sudden Air Traffic Control strike, or whether we would even see it again.

Eventually the plane arrived and we found out (from the passengers) that there had been an obstacle on the runway.  Seriously, Perpignan Airport Authorities, please could you find a few extra euros in your budget for an information desk – a nervous looking check-in lady muttering ‘5 minutes’ with her fingers crossed is not enough!
Posted by Caroline at 03:13 1 comment: 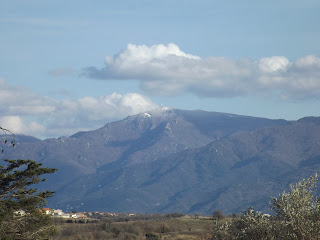 Have you been to see the Leonardo di Caprio film The Revenant yet?  The long journey, the slow and painful steps through the snow, the step ascents causing the muscles to contract in pain, pushing the human body to its’ limit.   Apart from the scene with the bear, this pretty much sums up my experience on Saturday afternoon...

This first picture is a view of the Pic de Neolous – the highest point of the Albères mountains.  It was taken in my garden on Saturday, in 16 degrees of sunshine, so it was intriguing to see the snow.  We decided that would be a good place to go for a walk.

To get there we took the ‘old’ road towards Spain (as opposed to the A9 motorway) and just as you get to Le Perthus, take the road on the left (D71).  This twists and turns and climbs for about 15 minutes and we began to see signs of snow in the verges.  We parked quite near the top where is actually a café/restaurant, which I think is called Le Chalet de l’Albère.  (But I wasn’t allowed to go in as we had brought a picnic…)

The walk started off quite gently (although I wasn’t the one carrying the picnic!) but it was bitterly cold as we strolled up the tarmac road through the forest.  The dog seemed less surprised than I was to see cows wandering about – but as long as she has a stick in her mouth, nothing bothers her.  As we left the trees and started up the exposed hillside the views were amazing.  There was a fallen fence of barbed wire, indicating the border, so having enjoyed the experience of having a foot in each country, we then walked up the Spanish side, from where you could see the sunlit sand of the beaches of the Costa Brava – Rosas, Empuria Brava, and Cadaques. 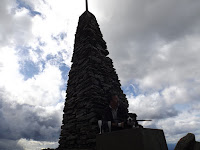 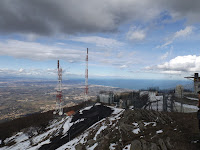 The snow was deep in places so it was pretty tough climbing but after several pauses we arrived at the top.  There is a huge satellite mast and what looks like a James Bond style nuclear power station there, but the main feature for ‘walkers’ is an obelisk surrounded by large stones (one of which marks the 1257metre summit). It was the perfect spot to set out our picnic (which, for the curious among you, consisted of a bottle of champagne, a sandwich, crisps, chocolate and an apple – my idea of a balanced diet)!  It was pointed out to me that there was perhaps no need to have packed two (heavy) plastic ice packs to keep the bottle chilled – but  I wasn’t taking any chances - who wants to drink warm champagne at the top of a mountain!  It was just as the first drink was poured that my partner realized that he had mislaid his jacket.  This was apparently my fault for not noticing earlier that it was no longer tied around his waist (I think it’s a French thing…)  So he set off down the mountain to track it down while I stayed to guard the picnic, the dog, and to enjoy the wonderful views – Spain behind me and France and the Roussillon plain in front of me. 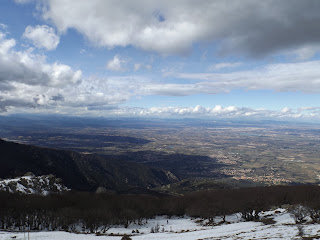 By the time he returned (successfully thank goodness as the car keys were in his jacket pocket), it was getting a bit chilly and clouds were appearing (Neolous is the Catalan word for Nebulous) so we quickly finished the picnic and decided to head back down.   I have to say that getting down was considerably easier than the climb up, mainly because it involved a ranger’s truck as the dog had injured her foot and couldn’t walk.  Thank you Loulou!!! 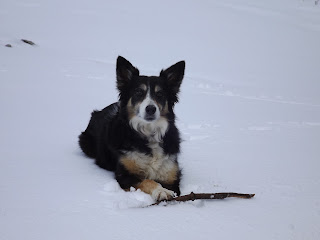