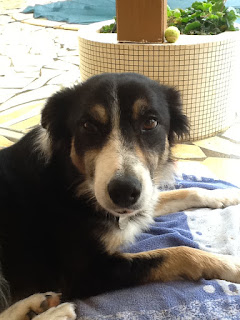 On Monday my husband fell in love and on Wednesday he left me. OK it is a dog and he has left for a pre-planned trip  back to the UK but it got you reading!   ‘Getting a dog’ was always something we had vaguely talked about but I always thought I was the keen one – until last weekend when I mentioned to my husband that the SPA were having an Open Day, and to my surprise he said that we might as well go as there was ‘no harm in looking’.  Fairly typically there was a barbecue and a Zumbaa demonstration going on so most of the dogs were in a state of hysteria, but then we saw ‘her’ sitting expectantly with a ball in her mouth.  My husband looked into those brown limpid eyes (as he had once done with me, many years ago) and I knew we were in trouble!  There was no request for a house visit by the refuge, we didn’t have the necessary ‘proof of residence’, we didn’t even have a collar and lead but 10 minutes later we were driving home with Loulou in the back of the car in a state of shock (us not her)!

Apart from falling into the pond within 5 minutes of arriving she settled in very well and quickly taught my husband to play fetch, go for walks on command and turn the water sprinkler on so she could jump in the spray.  But on the Wednesday he had to fly back to the UK and I was left in charge. 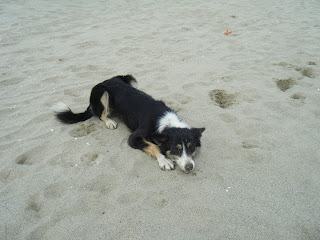 Dogs are welcomed in many places in France so I thought a visit to the pet shop would be a good place to start; they were very kind about the fact that she peed on the floor.  Evening walks around the neighbouring vineyards have to be carefully timed to avoid meeting the man with the gun and the four hunting dogs.  A walk around the local lake had to be curtailed due to her obsession with the ducks.  The trip to the beach was obviously her first view of the sea – and a new experience for me as, rather than lying in the sun I was running up and down shouting her name as she ran off towards Spain for 10 minutes.  Lunch was also a different experience as, rather than choosing a restaurant by what was on the menu I was looking for somewhere that Loulou could settle quietly (ie not in view of the sea or seagulls).  And here I had another problem – whilst reading the menu I kept stroking her as she lay quietly at my feet and then had no idea how to leave her to go and wash my hands but then the waitress arrived with the carafe of water (I had always wondered what that was for!)

Morning lie-ins are now just a distant memory, I haven’t worn anything smart for days now, I am, filthy, exhausted, covered in licks, and extremely happy!
Posted by Caroline at 04:17 1 comment: