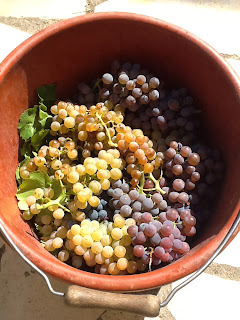 A few weeks ago we were woken up by shouts from the bottom of the garden and when I stuck my head out of the window I could see the vineyard owner waving and calling something.  With some elaborate hand gestures and further shouting I finally understood what he was saying – ‘On Coupe’ was the message, and ‘On arrive’ was my reply.  Grape harvest day had arrived.

The best thing about the vineyard at the bottom of our garden is that we don’t own it.  We have keys to the gate so can walk the dog, eat the grapes and collect the old vine stumps for firewood.  Everytime we meet the owner he complains that there is no profit in wine anymore – and then asks us if we want to buy it !  Having heard him on his tractor at all hours of the day and night weeding, pruning, spraying etc the answer is always a polite ‘non merci’ but we did offer to help with the harvest and now it was time.

They had obviously started much earlier in the day as by the time we arrived they had stopped for their mid-morning break of red wine and spicy sausage – which we declined.  We were handed a bucket and a sharp pair of secateurs each and then followed a brief lesson – always place your hand under the bunch of grapes and not near the stalk while you are snipping, (he showed us the scars where he had not taken his own advice) and never ever put the secateurs in the bucket (I can only imagine the damage this could cause to the wine presses) and then we were allocated a line of vines.

To start with it was quite enjoyable and there is a great feeling of satisfaction in finding a huge bunch of grapes hiding behind some leaves and we soon learned that some vines were more productive than others and some only produced some straggly bunches, but they all needed picking.  There were 6 of us in all – the vineyard owner and his wife, my husband and me, a Catalan man and a Belgian whose main job seemed to be to bring us empty buckets and tip our full ones into the trailer.  We had guests staying at the time and ‘E’ (using initials as he has such a distinctive name) came to join us for a while and made himself extremely popular when he made regular trips back to the house to bring out a jug of iced water which we drank out of plastic champagne glasses that he found in a cupboard – a surreal experience!

After two hours of back-breaking work, the trailer was full and I was looking forward to a break while it was tractored over to the co-operative, but Belgian Bucket Man had other ideas and left large crates at the end of each row so we could continue working while he was gone.

Finally it was lunch-break and we shared a bottle of Rosé before leaving them to eat and sleep in a shady corner of the vineyard while we went back to the house to see our guests.  The afternoon passed much the same as the morning but was becoming more and more painful – grapes do not grow at the same height (bad design !) and to strip a vine involves bending, stretching, and crouching and I was beginning to get complaints from muscles I didn’t even know existed.  Also did I mention it was 30° ?   But finally we reached the last line, there was much shaking of sticky hands and lots of grateful thank-yous and at last we staggered back up the garden, where I collapsed into a sun-lounger and my husband managed to jump straight into the pool without complaining about the water temperature !  I also have to mention here that while our guest ‘E’ was not on water-carrying duties he had filled his time by moving and restacking our log-pile closer to the house ready for winter so he was as shattered as we were – he is welcome here anytime !

Now that my muscles have recovered and the scratches on my legs have gone and my fingernails have grown back I can look back on that day as being one of the highlights of the summer.

PS.  Two days later Mr G, the vineyard owner turned up at the front gate holding a box which he said was a present to say thank you for our help.  I peered in hoping to see some shiny bottles only to see – grapes…. !  To be fair, they were big juicy Muscat grapes and not the smaller variety we had been picking but it was a little too soon for me to face another grape !
Posted by Caroline at 08:06 No comments: