The sun is shining, the pool is clear and sparkly, it is definitely that time of year again – ‘Airport Run’ season! There are plenty of transport links here – Perpignan airport has regular flights to Birmingham, Southampton, Dublin, Paris & Brussels; you can get to just about anywhere from Girona Airport (just over an hour away in Spain) as it is a Ryanair ‘hub’, and we have the TGV which can get us to Paris pretty quickly (and hopefully very soon to Barcelona in just 45 minutes). We also have Beziers, Montpellier & Toulouse Airports as very useful back up, but for the moment, I seem to be visiting Carcassonne Airport as Ryanair operate flights from there to Dublin, Edinburgh and most importantly to East Midlands Airport (which is the area where most of my friends and family live). Please don’t take this as any kind of ‘official guide to flights to the Languedoc’ as Ryanair seem to change their flight schedules as often as I change my mind, but it hopefully gives an idea of how accessible we are down here. It is so useful to have such a big choice – but can also be a bit confusing for visitors such as my in-laws who are more used to having trips arranged by a travel agent and had to just trust me when I informed them that they would be flying in from one airport and then returning via another! (And actually I cheated in the end and got my daughter to accompany them).

Anyway, back to Carcassonne Airport, which is where I was yesterday, and also 10 days ago and will be visiting again next Monday. Last week wasn’t so bad - my husband was taking the flight back to the East Midlands so we got there in good time, I watched him go through the departure gate and then went up and had a coffee in the first-floor restaurant (which nicely overlooks the runway). I watched the inbound flight land – and waved at my daughter who had just arrived on it - I could tell that she could also see my husband in the departure ‘lounge’ underneath me! I went downstairs to greet her and then she and I stood at the window of the restaurant again to wave goodbye to my husband as he boarded the plane.

Yesterday, one week later, wasn’t quite so nice. I am terrible at saying goodbye to people and it felt even harder because there was nobody coming in on the inbound flight to replace her so when the time came to hug Georgia goodbye I could barely speak for tears. (Am welling up now just thinking about it!). I went and splashed some water on my face and then went back upstairs and managed to compose myself while I had a coffee – and then stupidly looked out of the window again as she boarded the flight.... I have to say that the waiter there is extremely kind and I can only apologise for the amount of paper napkins I used but he will just have to get used to it as I am back next week to collect my husband again!

Posted by Caroline at 10:53 No comments: 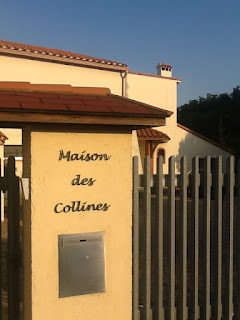 The French postal service amazes and astounds me. In the UK, a postcode either relates to one large building or is shared between a very few properties so technically the Royal Mail have no excuse for late deliveries or delivering to the wrong address (!). Here in France, the ‘Code Postale’ relates to a town or commune and covers thousands of properties. This is of very little help to anyone trying to use a SatNav relying on a postcode rather than an address, apart from the fact that the first two digits indicate the Departement number so should stop any confusion between, say, Villefranche on the Cote d’Azur and Villefranche in the Midi-Pyrenees. (Why is that France has so many towns with the same name I wonder?).

Anyway, back to La Poste and specifically their splendid achievement in delivering mail to our house. When we first bought this house last summer I could not believe that it had neither a name nor number. It was just ‘Route de Nextvillage, 66300 Thisvillage’ The ‘Route’ is about 5km long but somehow, despite the fact that we didn’t even have our name on the postbox on the gatepost, letters arrived. I have no idea how. Deliveries from other companies were more problematical and we have spent hours standing in the road clutching the mobile phone trying to direct lost delivery drivers. Our immediate neighbours have a plaque by their gate with “Mas del Xot” and a picture of an Owl so we figured that if they could give their house the Catalan name of “Owl House” we could name our house Maison des Collines as there are patently more hills here than owls. My great aim in life here is never to upset the locals so my first port of call was to La Poste to source their opinion – to which the answer was that it was ‘not compulsory’! Just to double-check I called in at the Mairie and the lady who worked there (now retired) just happened to speak pretty good English and sarcastically suggested that we would be calling the house “Mon Repos” or “Chez Nous”! I painstakingly explained the fact that actually no, we were going to use a play on words and call it Maison des Collines as our surname was Hill and she very nearly cracked a smile!

The reasons it has taken so long for us to take delivery of our shiny new name-sign are for once nothing to do with French tradesmen, so I won’t go into the details. Suffice to say that last Saturday, the plumber (?) finally turned up with the right drill bit and the house now has a name. I have not had any letters yet – and am hoping this is just a coincidence!

Posted by Caroline at 09:36 No comments: