Smoking is bad for ...... pretty much everything! 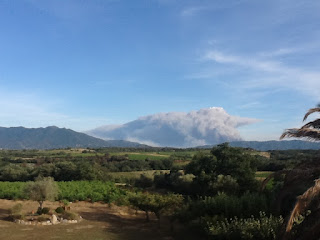 One of the main reasons we bought our house was because of the fantastic views of the Pyrenees and to Fort Bellegarde on the Spanish Border. Today I can hardly bear to look at it because it is shrouded in smoke due to a horrific fire which has so far killed 4 people (all French) and injured god knows how many.

It started around lunchtime yesterday (Sunday) on the Spanish side of Le Perthus. Le Perthus is a ‘Mecca’ for the locals (and holidaymakers alike) as it straddles the border but for some reason is a ‘duty-free’ town so that is the place to go to stock up on cigarettes, whisky and all manner of other things, and is also open on Sundays. The route through Le Perthus (D900) is the ‘old’ road to Spain but it soon became apparent that the fire was not going to be controlled easily so tourists and residents were quickly evacuated and the road was closed – together with the main A9 Peage motorway. It didn’t help matters that Sunday was a day of exceptionally strong winds and the fire quickly spread towards the coast.

The picture above was taken late afternoon yesterday. Last night I could see the glow of flames on top of the mountains, and also the flashing lights of the emergency vehicles.

This morning there was just the slightest wisp of smoke to be seen and it looked as if everything was finally under control and the wind had dropped – until mid-morning when a new wind from the sea began and the fire took hold again and now appears to be moving over the border towards France again. All day helicopters and 'water' planes have been flying backwards and forwards between Perpignan Airport & the border. As I write this (8.15pm French local time Monday evening) the view of the Pyrenees has completely vanished and I can smell the smoke.

This is the closest I have ever been to a ‘natural disaster’ and I find it pretty scary – not that I am in any danger (hopefully!) but the fact that such an enormous disaster has probably been caused by a discarded cigarette butt. Sadly it will probably be impossible ever to diagnose the cause of this but the ground is so dry here that just the tiniest spark is enough to cause chaos. And this brings me to the main reason I wanted to write this blogpost: it is just over one year since I stopped smoking. I had smoked for all of my adult life, in the car, at home, in the countryside, wherever and whenever I could. As with most smokers I knew it was a stupid habit but after several failed attempts to ‘give up’ I seemed doomed to continue. But finally last year something ‘clicked’ in my head and I realised I wasn’t actually giving anything up, just making a positive decision not to do something so stupid anymore. In fact, I think it was totally to do with buying this house – partly because I realised that the ridiculous amount of money I was spending on cigarettes every week would go a long way towards the renovations the house requires, but mainly because I would be really worried about setting fire to the garden! So, last June I slapped on the patches and here we are, 14 months later, quite anxious about watching the incendie developing in the distance but extremely relieved that I don’t feel the slightest moment of guilt in case I had anything to do with it!

Posted by Caroline at 11:23 No comments: