In the UK I used to play tennis at least once a week with a group of fantastic friends.  (When I say ‘play tennis’ we didn’t really let the game get in the way of a good conversation and spent longer having coffees afterwards than we did on the actual match).  Since moving here I am regularly to be seen with a tennis racket in hand but that is only to lob the ball as far down the garden as possible for the dog to retrieve, but I really missed playing properly.  Recently I met a lovely ‘old’ (in his 70s I guess) man at an apero evening in the village and he said that he and his friends often had to play as a threesome so would I like to join them.  I now find myself an honorary member of a men’s tennis 4 and it is the highlight of my week.

The first time I played I was extremely rusty but they were very patient and recognised occasional flashes of brilliance (!) so invited me to continue with them every week.  Personally I think it is because they are so thrilled to find a woman who doesn’t speak much – I am pretty fluent in french and the words for ‘yours’ ‘mine’ and ‘out’ were easy but I have never before needed to know the words for ‘tramlines’ and the first time one of them shouted ‘recule’ at me I thought he was being rude, but now I know it means ‘run back’!

I have just played again this afternoon and have learned a lot of new french words -  none of them to do with tennis, but I am also giving them a crash course in swearing in English!  As none of them speak a word of the language so will never read this,  I can introduce you to l’equipe: 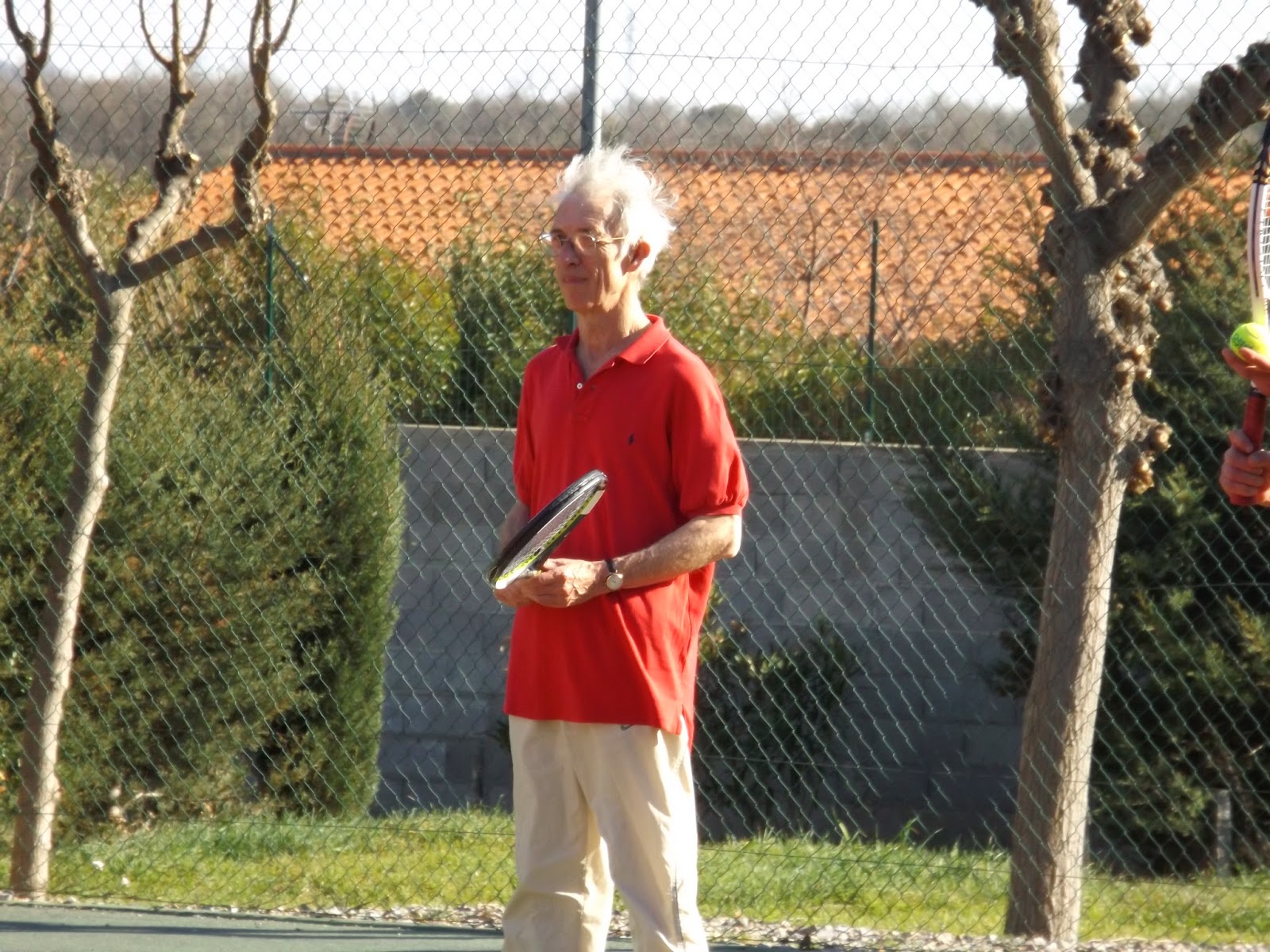 Here is Francis who always reminds me of Alec Guinness in The Ladykillers.  He is tall and skinny and is always accompanied by his very old dog who limps around the outside of the court.  I dread the day he decides to wear shorts! 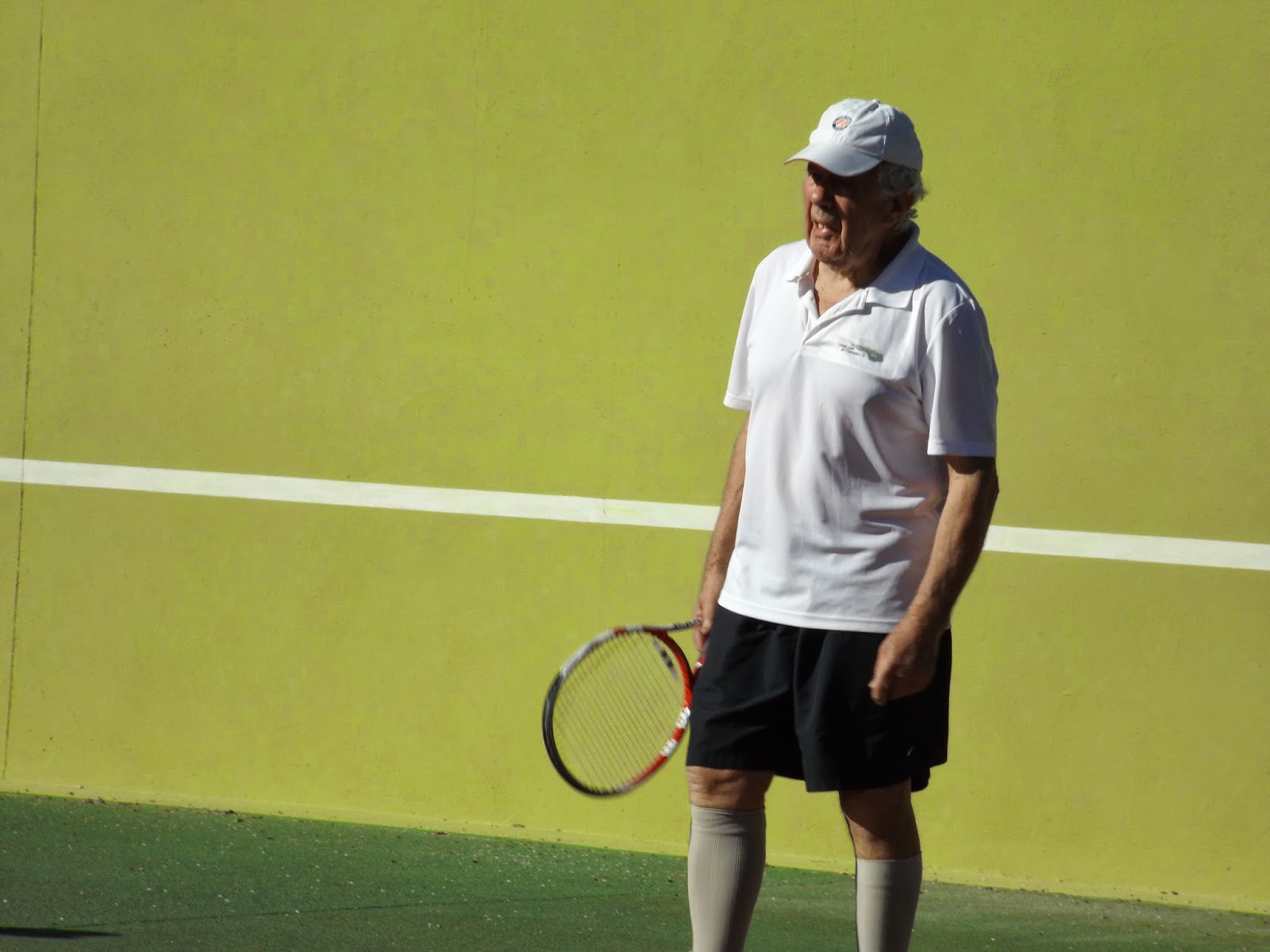 This is Janou, who I always think of as Benny Hill when he dressed as the boy-scout (with the fetching socks and shorts outfit).  He looks like a typically grizzly french farmer but is very kind and can run much faster than you can imagine! 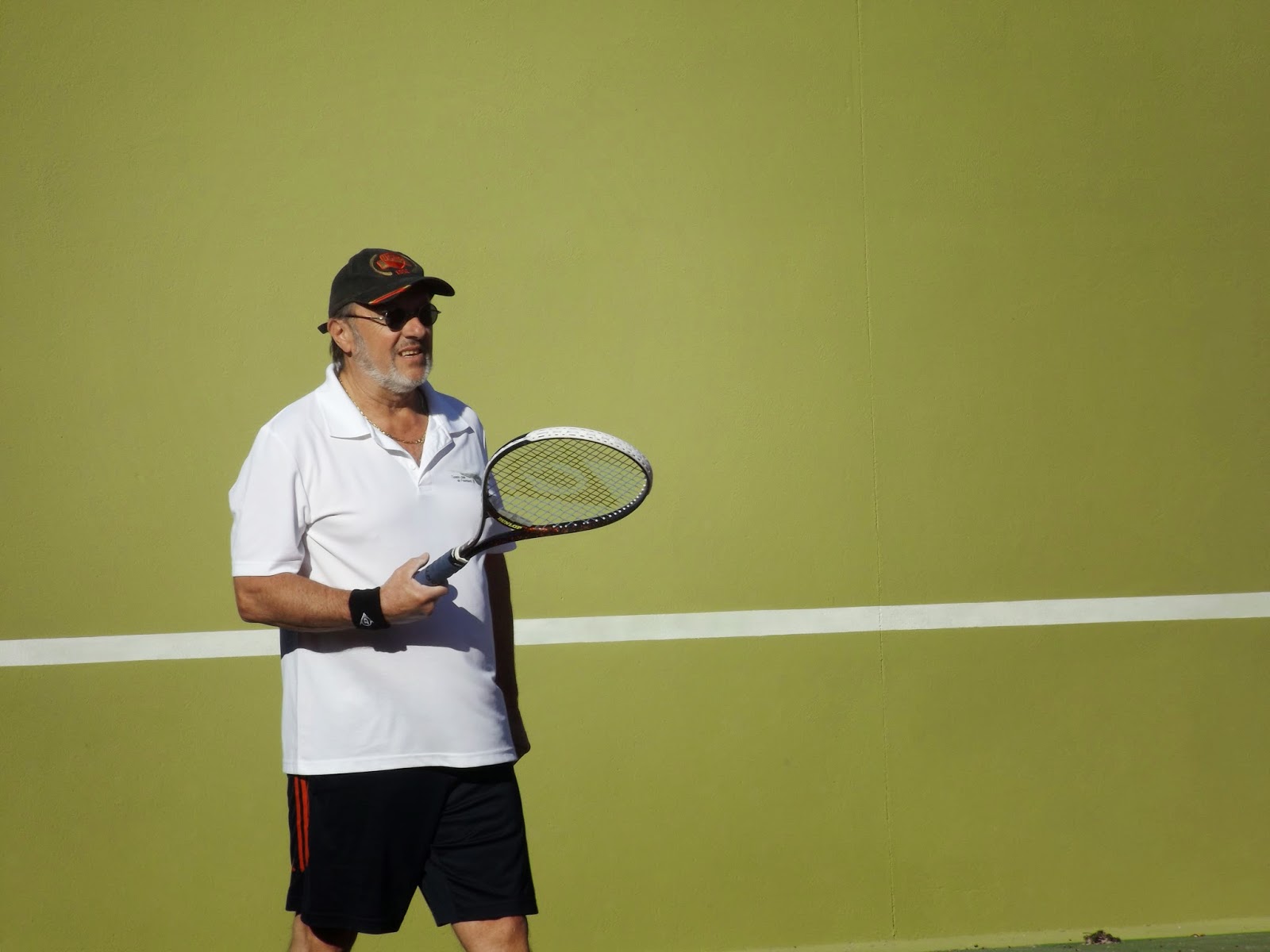 Jean-Jacques wears more jewellery than I do and spends much of the game announcing the score, wrongly and always in his favour.  He is quite short so when you lob him he just stands there and calls for a ladder. 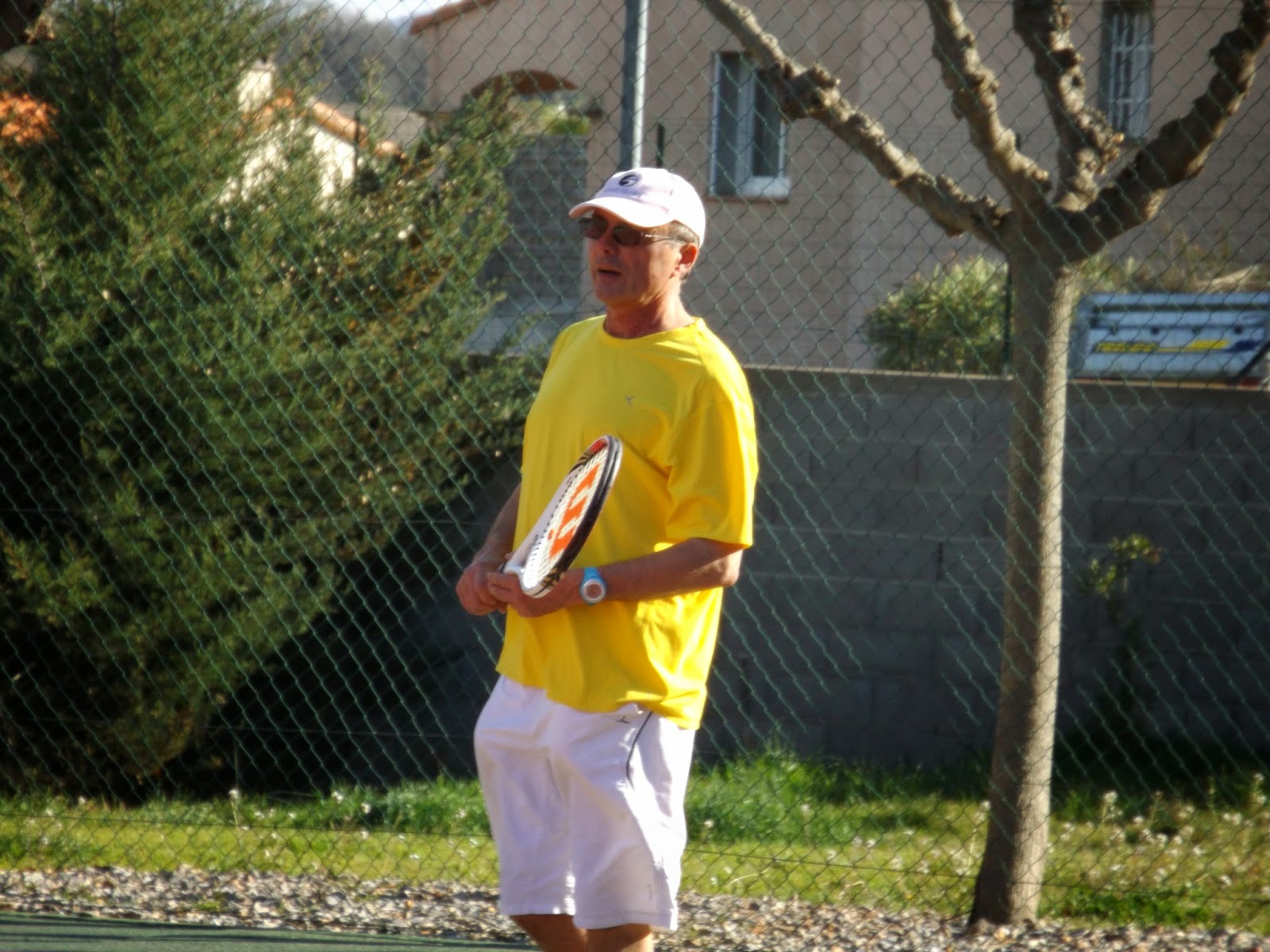 And finally Joel, who has the perfect outfit for every occasion and brings several changes of caps and sunglasses, selecting just the right accessory depending on which side of the court he is playing!

So, all very different from the group of attractive female friends I used to play with, and the setting is world’s apart too.  Playing on a hard-court under a bright blue sky, with the Pyrénées in the background and the Mediterranean just visible on the horizon, and hearing the clanks and thuds of a vicious game of petanque being played on the dusty car park, makes my years of playing on an indoor carpeted court at David Lloyd just a distant memory (but a very good one!).

It seems strange to me that even the scruffiest looking villages have such excellent sports facilities, but I am very much enjoying taking advantage of it and  have just paid my annual membership fee to the club – 40 euros!
Posted by Caroline at 05:45 No comments:

Tales of the Unexpected... 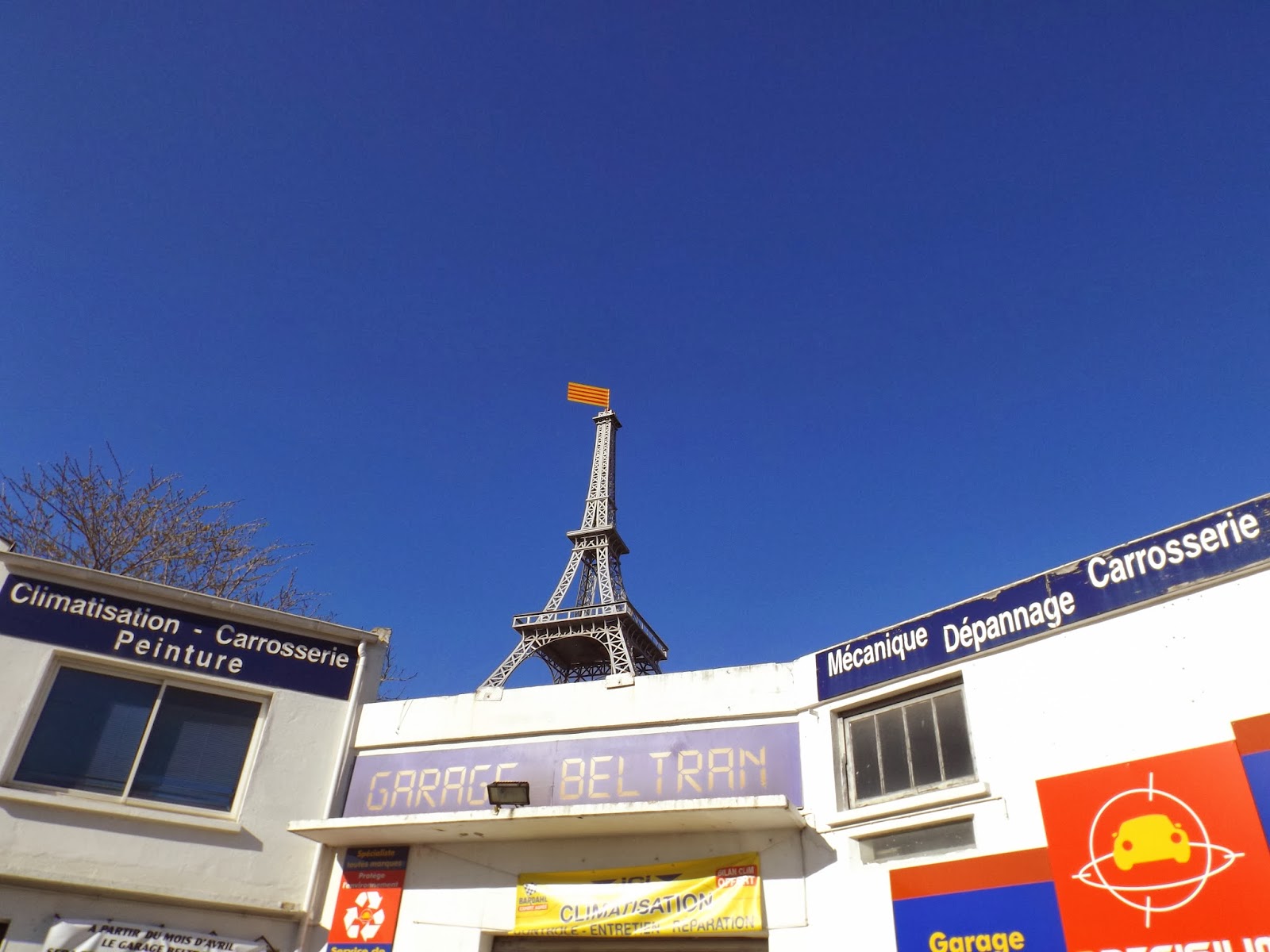 Clients often ask me what it is about the area that I love so much and the usual answers include the wonderful climate, the scenery, the relaxed way of life etc, but I have recently come to realise that what I love best about life here is that it is constantly surprising me.  No two days are ever the same, and here are just a few examples of events over the last week.

On Monday I went to visit an old stone Mas in the countryside.  Having driven down a bumpy track to reach the main gate, the owner was standing outside (with a horse) gesticulating for me to drive left and around the garden to reach the main house.  Literally, through the garden and along a garden path only just wide enough for a car to pass between the fence and the shrubbery.  Upon reaching the house I realised that there was no possible way of turning the car around and spent the whole visit worrying about how I could possibly reverse back – but needn’t have worried as she just told me to drive over the lawn in front of the house.

On Tuesday I was taking some clients to see several village houses and we suddenly came across a “Route Barrée” sign.  I followed the direction of the “Deviation” arrow and found myself at a t-junction with no clue as to where to go next.  I tried going right but the road headed down into a river bed with a few inches of water in it so turned round and went in the other direction, through a car park and a camp site and ended up back at the “Route Barréé” sign again.  Luckily another car arrived and we followed it along the river bed back to the main road, and continued our journey.  On our way back, the “Route Barrée” sign at the other side of the village had a “Deviation” arrow pointing directly towards the roadworks.  Getting through the village then involved going down a steep farm track, turning sharp right (which could not be done in one go and involved turning the car round first) and then driving up a steep track to join the main road.  Luckily the clients thought it was amusing and I am only pleased that on this occasion we hadn’t gone in separate cars. On Wednesday afternoon I drove into my driveway and a large golden retriever that I had never seen before came out of the front porch to greet me, shortly joined by two terriers and two border collies (one of which was mine).  There is actually a logical explanation for this.  I had given a set of keys to a friend who had volunteered to do some painting in the house and she had mentioned that she would be bringing ‘the dogs’.  Vicky is mad about animals and always seems to have a house full of waifs and strays which she tries to find good homes for so while I was expecting her to bring her own two dogs to play with mine, I shouldn’t have been surprised to find a grand total of 5 dogs running around the garden even though it felt like an episode of The Twilight Zone at the time!

Thursday brought two driving-related incidences which amused me.  Firstly I encountered a triangle warning sign at the side of the road with just an Exclamation Mark and no other clues.  I slowed down and after 2 kilometres came across some roadworks with a traffic light system in place.  Although I could see no oncoming traffic, I was very impressed to see that the red traffic light had a Countdown timer in place showing that the wait would be 2 minutes.  This was obviously far too much for the driver behind me to cope with and I had to laugh as he accelerated past me and then had to pull into a vineyard to avoid colliding with a very slow-moving 2CV coming towards us on the green light!  And later in the day I was driving back between St. Paul de Fenouillet and Estagel and noticed that either the local council or some graffiti artists have a sense of humour – on the tarmac on the road I saw big signs saying “Rappel 90km”, then another warning of a speed camera in 7km, then at the 7km point the white markings said “Sourire” (smile) followed by “Cool”!

Friday’s strange moment came when the dog started barking and I spotted an old lady in the vineyard at the bottom of the garden.  To set the scene, this vineyard is on a bit of a plateau, only accessible from the main road via the farm on the left, or through the gate in our garden, so to see an old lady there was quite unusual, to say the least.  I grabbed the gate key and went through to say ‘hello’ (and to find out what on earth she was doing).   She must have been 90 years old and was wearing one of those floral housecoats and was putting something from the hedge into a carrier bag.  It turned out that she was collecting wild asparagus and we discussed recipes and life in general and it was only after a very friendly conversation involving the words ‘pueblo’ and ‘amigos’ that I realised we were talking Spanish!  She and her carrier bag then disappeared down the escarpment on what I had always assumed was just a Sanglier track!

The title picture for this blog is just a typical example of the ‘strangeness’ of life here – why does the local garage have an Eiffel Tower flying the Catalan Flag? – Why not!


NB  If anybody is interested, this garage is featured in a lovely film set in the region starring Omar Sharif – J’ai Oublié de te dire.  Well worth tracking down and watching.
Posted by Caroline at 12:14 No comments: