'Tis the season to eat Hob-nobs! 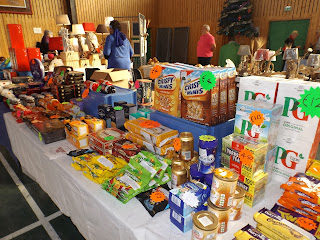 The South of France can by no means be mistaken for Australia, but in a similar way, Christmas here just doesn’t feel quite right.  For a start, the sun is shining and the temperature has been hitting 20 degrees recently, there are no carol singers knocking at the door – just the firemen and refuse men calling to offer season’s greetings and a calendar (for a small donation), and, unlike England, where feverish Christmas preparations began in the shops in September, here the shops only become ‘Christmassy’ around the end of November.  Christmas Cards haven’t really caught on, and the final straw is that Christmas only lasts one day here –Boxing Day doesn’t exist and everybody is back at work!

I was feeling very ‘Bah Humbug’ about the whole thing, until yesterday, when I finally discovered the true Spirit of Christmas – the annual British Christmas Marché at St. Jean Pla-de-Corts.  While most of us who have chosen to live in France must have all said at one point or another that we wanted to integrate, live the French lifestyle and adopt local customs, there does come a point where you have to cave in – and Jammie Dodgers are my weak-spot! 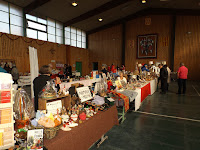 This market has a great range of stalls with local wine producers and artisans offering a great range of presents, but the stalls which always seem to attract the most attention (and not just from me!) are those offering ‘delicacies’ from the UK which are hard to track down here.  I am talking about Mince Pies, Jacobs Cream Crackers, Christmas Puddings, Crackers, Chocolate Hobnobs and Jammie Dodgers! 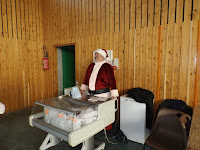 While the children eagerly look forward to their meeting with Santa, the adults look forward to meeting another ‘legendary’ figure – Mister Saucisse!  This is actually a guy called Tim (who confusingly this year was wearing a Santa outfit) who makes his own range of sausages and descends from somewhere above Carcassonne to deliver to various towns and villages around the Languedoc.

I was so filled with the Christmas spirit that I went off to Perpignan this morning to continue my Christmas shopping and realized that there is actually something very important that the French do so much better than us.... to hear those magic words 'c'est pour offrir' - and then to have your purchase whisked away and expertly gift-wrapped - is music to my ears!


Wishing everybody a very Merry Christmas and a Happy New Year!
Posted by Caroline at 10:28 2 comments: