I’ve just replaced my ancient GPS.  It has worked pretty well for 15 years but the fact that I couldn't update the map information was beginning to annoy me – and also the lady who reads out the instructions.  I would be blithely driving on a new bypass and the map would show that the road didn’t actually exist and that I was in the middle of a field.  The lady inside would spring into life and start screaming ‘what the hell do you think you’re doing, I didn’t tell you to turn left here, turn around as soon as you can, we’ll never get back to civilisation this way’.  (Well actually that is perhaps a tiny exaggeration as she would just say ‘Recalculating’ in a sarcastic tone of voice – but you could almost hear a very quiet ‘tut’ afterwards). 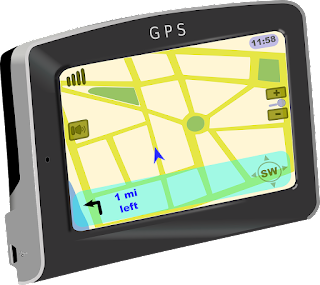 In the new GPS I found that you could choose from a selection of people to read out the directions.  I ruled out ‘John’ (for reasons most women will understand),  ‘Jane’ pronounced the word ‘cross’ as ‘crawss’ and I didn’t want to hear that at every roundabout, so I have chosen ‘Susan’, a computer generated non-offensive voice.  So far we are getting on very well; if I choose to ignore her directions she doesn’t go mad, she just goes quiet for a while (and I can almost hear her thinking ‘wow, what a good idea, why didn’t I think of that route in the first place’), and then she highlights the new route on the screen and we carry on in companiable silence.

‘Susan’ also very kindly tells me the names or numbers of the roads to turn onto, and also the name of the town or village that the road is leading to.  Unfortunately she seems to struggle greatly with french pronunciations and the way she said ‘St Jean de Lasseilles’ yesterday had me crying with laughter so much that I think I upset her and she has now stopped saying the names.  I will give it a while before I drive through Marquixanes and Eus!

Just one last 'topical' thought on the subject of buying a SatNav - several of the models which stated they covered 'Europe', didn't seem to include the UK.  Brexit already......?
Posted by Caroline at 02:51 2 comments: