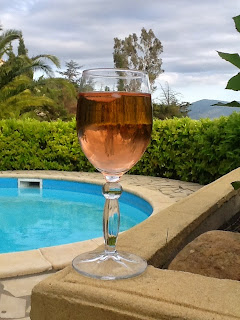 It comes as no surprise that the traditional salutation when raising a glass with anybody here is not  ‘Cheers’ or ‘Bottoms-up’, but ‘Santé’ – meaning Good Health to you.  Health appears to be a national obsession in this country and conversations about cough remedies and digestive problems can last for hours.  Even the tiniest village has a pharmacy, and they even provide ‘bags for life’ emblazoned with their logo.  The only time I have ever felt the need for a large carrier bag at a Pharmacy was when I frequented Boots in the UK at Christmas during their 3 for the price of 2 promotions and my purchases had very little to do with health.  Anyway, I digress, but having set the scene will continue with my story.

At the AGM of the village tennis club, it was decided (after much debate) that all members of the tennis club should produce a medical certificate to show that they were fit enough to play.  The cynic in me did wonder if the local doctor was on the committee, but I said nothing, and made an appointment.

He carried out the usual blood pressure checks and listened to my heart and he then asked if I was in good general health.  Knowing that I was going to have to pay around 20€ for the ‘medical’ I thought I might as well get my money’s worth and mention the fact that I had lost a bit of weight recently and was feeling a bit tired. He started scribbling on a form and I found myself leaving with a ‘prescription’ for a load of blood tests.

The tests were done at the local Laboratoire d’Analyses and I was told I could pick up the results in two days’ time.  This is what motivated me to write this blogpost as I was extremely surprised about this.  I had expected the results would be posted through to my doctor and that I would then make an appointment to see him to go through them with him, but no, you are left to read them on your own.  I was very much hoping that if they had discovered something terrible there would have been some kind of warning on their computer so they would have taken me into a side room rather than letting me read that I had some incurable disease, so I took the envelope home with me.

I have never felt the need for a degree in Bio-Chemistry before now, but unless you have one I don’t think there is any chance of understanding the 4 pages of results I was presented with.  I recognised a few words (mainly my name and address) and all of the results seemed to be within (or pretty close to) the ‘normal’ range, but I have no idea what I have been tested for.  I was a bit proud to read that I had an “ultra-sensible TSH” but when I googled the term I discovered that is just the name of the Thyroid test, so I gave up.  There was nothing written in red telling me to rush to the nearest hospital so I am assuming I am fit and healthy – which is what it says on the medical certificate given to me by the Doctor before sending me off for all the tests!
Posted by Caroline at 07:50 No comments: