Animals of the Pyrenees-Orientales 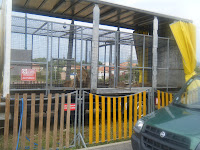 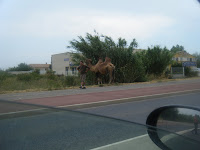 On my way to the garage the other day I spotted two llamas and a camel tied up on the roadside.  I managed to take a quick picture but it was only as I was filling the car that I looked up and spotted a trailer containing 3 lions parked next to the pumps!  The circus was in town so while this is not ‘the norm’ for the area it made me think a bit about the different kinds of wildlife I have come across since moving here.

Wild pigs were my main concern but I have had very few sightings – one I saw lying dead by the road and I heard one snort and run off as I walked along the country lane to the village so I’m guessing it was more scared of me than I was of it – if only it knew!  I’m still not sure what was coming into the garden and digging holes around the fruit trees a few weeks after we moved here as there was only a very small gap under the wire fencing at the bottom of the garden but, once we had blocked the hole with a plank, something was making a lot of banging noises trying to break through the barrier so I assume it was a very cross Sanglier. 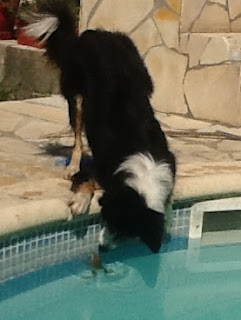 Reptiles have never been top of my list of ‘cute’ creatures and I would still love to meet the first Frenchman who looked at a frog and thought ‘hmm, that looks tasty’.  We have a lovely pond in our garden with everything a frog could wish for and yet they still prefer to jump into our pool and we regularly have to scoop them out with a net which can take ages as they are very clever at holding their breath and hiding behind the pool alarm mounting.  Perhaps we are luckier than our friends who live near Toulouse and have to deal with snakes in their pool.  Readers of a nervous disposition should perhaps skip to the next paragraph - the only encounter with a snake in our garden occurred last summer when I called my husband to watch a frog jumping around in front of the hedge, and then screamed as it was chased and caught by a snake.  I’m ashamed to say that I had to ignore the whole episode as I wasn’t sure whose side I was on...  I have recently come across 2 more snakes – one of which I couldn’t avoid running over as it was crossing the road.  In the rear view mirror I could see it was still wriggling but I am still wondering, why did the snake cross the road....

And still on the subject of reptiles, there are the lizards.  I don’t mind the little normal ones who tap-dance their way across the terrace in the heat of the day but the Geckoes with their big sticky feet make me feel a bit uncomfortable, particularly as one seems to be living above the polystyrene false ceiling in my office.

Which reminds me, I am literally suffering from ‘empty nest syndrome’.  In March a very determined bird (apparently a Redstart) insisted on flying into the house and making a nest in the boiler room next to my office.  At first it was quite amusing as the female soon realised when the patio door was shut or not but the male was regularly to be found shocked and stunned (as was our Son when he came to visit as being 6’3” tall he often found himself directly in the flightpath).  Luckily the birds soon found a new access – through the office, via the Salon, through the bathroom window, into a Verandah and out through an opening around the exhaust pipe connected to the old generator (every home should have one!) and we no longer had to keep the patio doors open for them.  Now the birds have flown the nest and we no longer have to duck when moving around the house.

And finally, to dogs and cats.  I always assumed they were just cute pets but here there are many wild ones.  Apart from the fluffy little dogs that are carried around in handbags in the town centre, many dogs here are ‘working’ dogs and spend much of their time roaming around protecting their territories.  Just the other day two dogs rushed out of a field by the roadside and attacked the car as I was driving.  In winter we have to be very careful when walking around the vineyards as the hunters don’t seem to pay much attention to the ‘no hunting’ signs and if we hear barking and the sound of bells (which are tied to the collars of the dogs so the hunters don’t shoot them by accident) we turn and go home.   The cats aren’t much better as there are so many abandoned ones that they turn feral.  On one occasion we had stopped at a roadside fruit stall and a wild cat suddenly shot out and attacked the dog!  Luckily the stall owner had a bottle of water to hand so after being drenched with water and beaten with a plastic bottle it ran off hissing.  Just another day in the French countryside!