Confinement started pretty well for me.  I sorted out several cupboards, completely cleaned the kitchen, made 35 face-masks, painted lots of furniture, filed (and read) my bank statements, exercised, weeded the garden and made chicken stock.  Didn’t do so much the next day …  (!) Now we are on Day 40 of lockdown and (to quote my Granny), my Get Up And Go has Got Up and Went.  When you don’t know whether it’s Christmas or Tuesday as every day is the same, it’s hard to get motivated and it is too easy to just put jobs off until the next day, and the next day …

But this is also a time of ‘self-discovery’ - so here is what I have discovered: 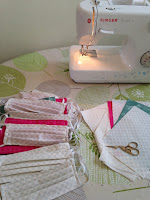 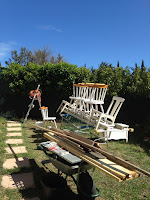 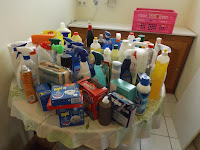 I shall sign off now as my Fitbit alarm has just gone off telling me it is time to move.  I thought it was broken as it hasn’t done the buzzing/flashing thing to celebrate the fact that I have achieved my 10,000 steps recently.  Perhaps you are supposed to do them all in one day …!
Posted by Caroline at 09:53 No comments: 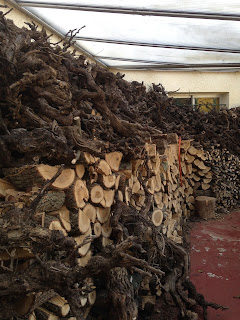 At the risk of being accused of ‘stock-piling’ here is my stock of piled wood!  And the best thing about it is that it hasn’t cost a penny.  There was a very high price to pay physically ‘though - sore muscles, broken fingernails, blood, sweat, tears - I was exhausted just watching him!

Apparently I am not very gifted at ‘logging’.  ’Useless’, ‘Incompetent’ and ‘Dangerous’ were just a few of the words that I heard that I managed to translate from ‘shouty’ french.  But despite not having any of the necessary qualities to be a lumberjack (apart from a rather nice checked shirt) I did do my very best to help.  I wasn’t allowed to touch the chain-saw (to be honest, I didn’t volunteer), was briefly allowed to play with the log-splitter, (but was fired from that job because I wasn’t strong enough to lift whole logs onto the table),  and eventually found my true vocation was hurling vine roots on top of the stacked logs.  Unfortunately selecting logs for the chimney has now turned into a very dangerous game of Jenga! 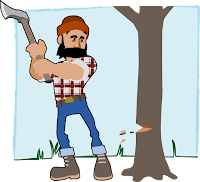 The wood has come from various sources.  The large logs are mainly from oak trees that are cut down by the local farmers and seem to be left lying around (we always ask permission, rather than just turning up with the chainsaw as some of the farmers are quite big and scary looking.)  The twisty ones are old grapevine stumps (souches) - you often see piles of them as you drive by the vineyards, with a sign saying ‘Servez-vous’ - so we do!  The rest of the pile also includes old bits of wooden furniture, fence posts and generally anything we find that can be burnt.

I just hope my clients Mr and Mrs P aren’t reading this as they recently emailed me to ask if I knew where they could buy firewood.  Ironic as they had just moved into a beautiful stone mas with 7 hectares of woodland. To be fair, the previous owner had obviously decided that as the house was going to be sold, there was little point preparing a big stock for the winter, and even if they could find where the removals men had stored their Axe and Wheelbarrow, anything they cut now would not be ready to burn until next year (wow, never knew I would know things like that!).   Luckily I was able to give them a supplier’s number, but it made me realise how important ‘the woodshed’ is - particularly as the boiler is now out of fuel....
Posted by Caroline at 02:33 No comments: