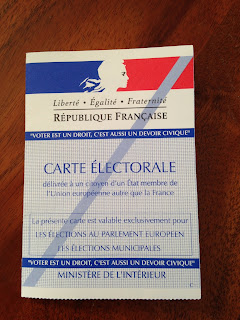 I’ve just spent one of my regular weeks in the UK, visiting family, friends and Marks and Spencer.  It was the week leading up to the European elections so naturally there was much discussion in the media about Brexit and how strange/stupid it was that Britain was still in the position to have to elect EMPs.  All of this (as usual) went a bit over my head as being a permanent French resident apart from having the final document, I seem to have no voting rights in any country.  Or so I thought… 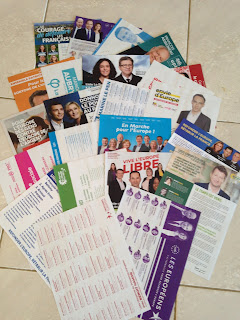 I returned home to find a Voting Card and a large envelope full of leaflets outlining the manifestos (or manifestiii?) for about 27 different parties all pleading with me to vote for them!  To be honest I wasn’t particularly interested but the voting card says ‘To Vote is a Right, and also a Civic Duty” so I thought I would have a bit of a read.

In the ‘olden days’ it was much easier – you had the 2 or 3 major parties and the Monster Raving Loony Party for whom you voted if you wanted to prove a point.  Among all my leaflets it was hard to see which were the ‘Loony’ parties and which were the ‘normal’ ones, but I finally made a choice and went off to the polling station.

Access to the hall was difficult as this is a small village and the entrance was blocked by what seemed to be the entire population exchanging greetings and kisses.  Unlike the UK system where you are given a voting slip and disappear discretely behind a curtain to tick a box, in France you are given a small brown envelope and are directed towards a table with all the leaflets from all the parties (including some new ones I hadn’t even seen before).  You then take your chosen leaflet into the ‘booth’, fold it up and put it in the little envelope.  Everybody in the hall can therefore see who you are voting for – but I’m guessing that some of the more secretive voters had taken several leaflets as a kind of ‘smokescreen’ as the bin in the booth was full of screwed up documents.  The Green Party would be furious at the waste of paper!  The Mayor himself then signs your voting card and off you go.

I see this morning that Marine Le Pen’s party has won and I can assure you this was not my fault.

Posted by Caroline at 10:03 No comments: