You never run out of things that can go wrong!

I was so excited about my Son and his wife coming to stay for their summer holiday and wasn’t even panicked when he asked if his friends and their toddler could come too – it gave us exactly the deadline we needed to finally get our ‘Gite’ project finished and ready for occupation.  I had loads of ideas of how we would spend our time – lying by the pool, trips to the beach, local markets, meals out in lovely restaurants – and had even planned a big party during their stay.

Day 1 – All went very well – lovely convivial evening together eating and drinking on the terrace and watching the sunset.
Day 2 – Not too bad – went to the shops to get more mosquito repellant as daughter-in-law being bitten to death (everybody else was fine as they were just concentrating on her!).  In the evening the ‘young’ all decided to go off to Thuir for a meal – no room at any restaurant and they ended up at the Buffalo Grill where they waited 1½ hours for a badly cooked meal, but too hungry to give up and move on! 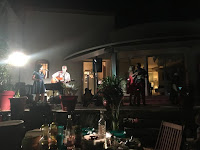 Day 3 – Disaster –The fact that we had been so busy working on the Gite and  preparing for the party meant that I was more than ready to relax and enjoy myself.  Unfortunately I ‘relaxed’ so much (possibly due to not much food and too much wine) that I danced myself off the terrace!  Apart from having a bruised bottom and grazed elbows I thought I had got off lightly, and went to bed. 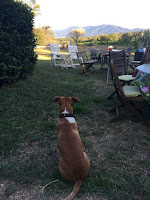 Day 4 – Not good – Somehow managed to get up and make a coffee.  Surprisingly my head didn’t feel too bad but perhaps that was due to the fact that the rest of my body was hurting instead!  I made a start on clearing the debris from the tables in the garden and was at first dismayed to see the toddler appear with her mum (was in no state to be chatty with a 2-year old!) but actually she was useful as I found I couldn’t bend down to pick up the paper plates and napkins that had fallen so as she was already much nearer the ground, she did it!  Went back to bed after an hour – pausing only to deliver an aspirin to J-M who I had found fast asleep in the spare room with his hand resting on a cold cup of coffee.  The ‘young’ ones somehow managed to make their way into Perpignan in the evening to enjoy the ‘Thursdays of Perpignan’ summer evening show.  (NB not my son, who also spent most of the day in bed, only coming downstairs to ask for a mop and bucket) (and a Croque Monsieur later!))
Day 5 – Very bad – Decided to go to the Doctor as I was unable to move very far without waves of pain in my rib.  He gave me a prescription for some very strong pain-killers and sent me for an urgent x-ray just in case anything was in danger of piercing my lung.   Several hours later the x-ray showed that I had just ‘detached’ something so in a wave of euphoria that I wasn’t about to die of a punctured lung we decided to go out for a meal at the lake.  Getting in and out of the car took longer than the car journey, and I discovered that resting your elbows on the table is not only bad manners but extremely painful.  I also put an end to ‘dry’ Friday (before taking the painkiller!)
Day 6 – And getting worse – The ‘drugs’ seemed to be working as long as I didn’t make any sudden movements.  J-M however was limping badly – he had jumped off the terrace to ‘rescue’ me when I fell, forgetting that he had only recently recovered from breaking his foot a few weeks ago.  Emma (mother of Toddler) was feeling very ill with a flare-up of tonsillitis.  It was obvious she needed antibiotics but as it was a Saturday morning all the GP surgeries were closed so the only option was to send them off to the hospital.  No sooner had they left, Oliver (Son) appeared with blood all over his t-shirt from a wound on his head – having walked into the corner of one of the awnings on the terrace.  Luckily it didn’t need stitches but he spent a very quiet day after that!
Day 7 – Some improvement – In hindsight perhaps choosing a restaurant in Castelnou – a medieval town perched on a hill with steep cobbled streets – was not the best choice for such a group of walking wounded and and we must have looked quite comical as we made our way slowly up the hill; Me clutching my ribs, J-M limping, Samantha stopping every 5 minutes to scratch her bites, Emma still feverish with her tonsillitis, and Oliver wearing a hat!

But despite all that, they seem to have had a good time - and these photos prove that you should never believe the pictures you see on Facebook - there is often a story behind it! 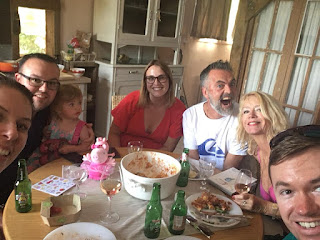 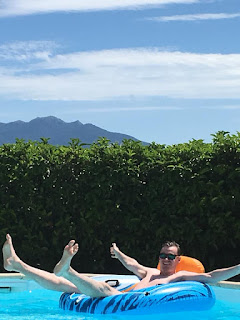 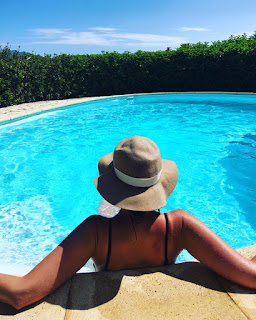