Making an Exhibition of Myself 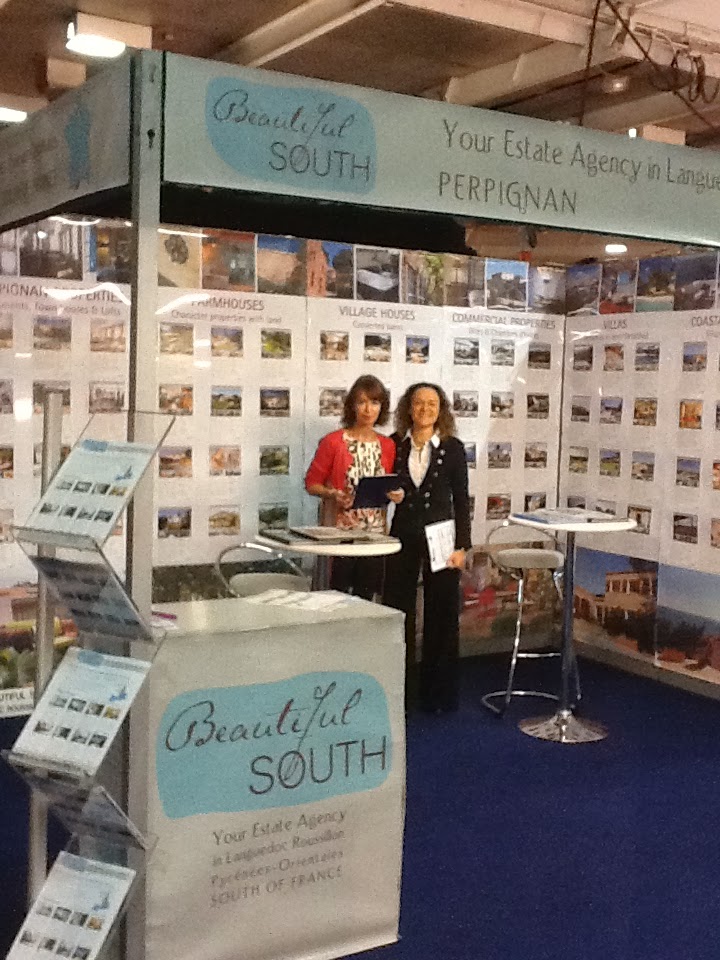 A few months ago Eve (the boss at the agency) asked if I wanted to go on an all-expenses paid long weekend in London.  I immediately said yes, before wondering why Valerie was hiding behind her computer monitor – I had just volunteered to help run the stand at The France Show!  And now that my feet, back, throat and head have had time to recover I can put the pain behind me (rather like childbirth) and am able to remember what a good time we had.

We flew British Airways which for a Ryanair stalwart like me was such a treat – checked luggage allowance, allocated seats, and cabin crew who not only spoke english without an unintelligible eastern european accent but also ‘gave’ us food and drink.  We took a taxi from Heathrow rather than taking the tube as, apart from our suitcases we were also in possession of ‘The Tube’.  This is a 1.5m high cylinder with wheels at the bottom and a screw-top lid with handle which contained all our display material.  I have no idea what a Weapon of Mass Destruction looks like but I imagine it looks like this and I am amazed we weren’t stopped by customs on the way through.  We were delivered to Earl’s Court and after spending 3 hours with double-sided sellotape, staple guns, ladders and blu-tac, we were ready – to hit the sales!  (You will note that I am glossing over the part where we dragged our  cases and the now empty Tube round the corner to the hotel – it soon became apparent that we were unable to screw the lid back on tightly enough so that every 20 yards or so the tube crashed to the ground leaving Eve walking along just carrying the lid, causing much amusement to the evening commuters).

Friday morning found us ready for action – coffee in hand as we chatted to the other exhibitors then came the 9.55 announcement that the show was about to start, the accordion music kicked in and it was all a blur from then.  We had a fantastic day chatting with potential purchasers, existing clients, vendors and general francophiles who reminded me so much of me just a few years ago when I went to my first property show and  would never have believed I would now be living and working in such a fantastic area. Eve knows London much better than I do so she announced that she would take me to her favourite restaurant in So-oh (while she speaks excellent english, H’s seem to baffle her!)   It didn’t  matter that it was a 20 minute taxi ride away and we had to queue outside in the pouring rain (having been given menus to peruse as we stood under heat-lamps), it was a great meal and our downfall was that when we arrived back at the hotel we bumped into ‘Charles’, a lovely fellow exhibitor who introduced Eve to the joys of Pinot Grigio.  I was already well-acquainted with PG and sadly, while my brain knew it should say ‘Thanks I’d like a sparkling water please’ the words Yes, I’d love another’ came out of my mouth.

On Saturday morning I thought I would die but as long as I didn’t bend down or turn my head too quickly the world didn’t spin too much and several strong coffees seemed to do the trick.  And  I can only apologise to the clients who I had met just a few weeks ago for not remembering their names – I would’ve been hard pressed to recognise my own children that day!    At 5pm I assume somebody finally shot the accordion player and the show was over – and Eve announced that we were going to ‘Arrods’.  I announced that she was barking mad and that she would be going on her own as all I wanted to do was to put my feet up in the hotel for a while – which I did.  (And for any ex-pats reading this who think they still miss UK TV, they should try watching something called The Reflex – where are Ant and Dec when you need them!)  We had arranged to ‘meet ourselves’ in the hotel bar but we didn’t last for long and were in our rooms by 10pm – although obviously we told the girls in the office that we had been out clubbing ‘til all hours!

The last day was much less busy and I found time to wander around the ‘non-property’ area – wine, cheese, clothes, can can dancers and.... John-Christophe Novelli!  Eve went rushing off to see him (I thought it was because was as besotted as I am) to present him with details of a restaurant we are selling – and she got a kiss!  In order to catch our flight we had to start dismantling the stand before the official end of the show – Eve was peeling off posters as quietly as possible while I was still talking to some clients – but amazingly it took just 15 minutes to dismantle what had taken 3 hours to put together.  We then ran through the Halls with our suitcases and The Tube (having found a strong man to put the lid on properly for us) and threw ourselves into the waiting taxi and sped off to Heathrow.  Eve announced that she was was completely ‘Naked’.  Perhaps one day I’ll tell her it is pronounced knackered!
Posted by Caroline at 10:09 No comments: