Can I have my pocket money please? 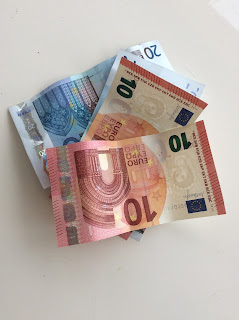 With so many different passwords and pin numbers to remember it is always a relief when the words ‘Code Bon’ appear on the payment machine at the supermarket.  The pleasure is greatly reduced when it is followed by the words ‘Paiement Refusé’.  This is quite a regular occurrence and I can assure you it is not because the account is overdrawn.  No, it is simply that, according to the lady at the bank, I have spent enough money for the month.  Seriously!  I have the money in the bank and yet somebody has decided that I can only spend a certain amount each month!  And this is ‘normal practice’ in France.  To be fair, the bank  did explain that I could continue to use cheques and also to draw money out of Cash machines but the debit card would remain ‘blocked’ until a certain period of time had passed.   Obviously I am not going to starve but given that I don’t have a cheque book for that account, and there is a daily limit on the amount you can draw at a cashpoint, this is a problem.

To be fair, in normal daily life, having a monthly spending limit isn’t a problem.  But when is life ever normal?  The first time I came across this problem was when I was furnishing our first apartment.  My shopping spree ground to a halt on day 2 because I had already reached my limit for the month – ‘frittering it away’ on beds, sofas, appliances etc!  You can (and I did) telephone and ask for a ‘temporary increase’ on your limit but I find it very annoying to have to ask somebody for permission to spend my own money – and also to have to explain why.

Apart from the monthly spending limit, the bank has now come up with a new way to attempt to govern my spending.   My brother has bought a holiday home here in the region and has asked me to oversee the renovations.  As he doesn’t yet have a French bank account he is transferring money into my account and I am buying materials and paying tradesmen on his behalf.  Simple?  Apparently not.  When the first transfer arrived the bank lady actually rang me to complain that I hadn’t warned her that some money would be arriving in the account.   I did mention that, although I am not greatly experienced in the world of banking I believed that it was perhaps normal practice for banks to expect occasional deposits into accounts and accept them without being surprised.  I don’t think she appreciated my sarcasm and we have a ‘rendez-vous’ next week....
Posted by Caroline at 11:05 No comments: 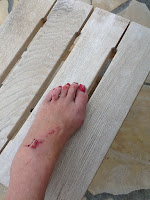 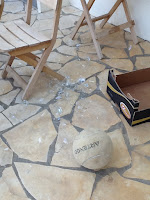 On Monday evening I was carrying a tray of glasses outside and accidentally trod on a football that the dog had kindly left by the step for me.  My left foot collapsed under me, the tray flew into the air, and I landed on the terrace surrounded by shards of broken glass.  On first inspection things weren’t too bad – a few cuts here and there, a scrape on the top of the foot, and I managed to hobble around for the rest of the evening.  By the morning my foot was twice the size and I couldn’t put any weight on it but still assumed it was just bruised and managed to ‘skate’ around the house on a towel.  Thank goodness for tiled floors!

By 11am, having discovered that there were just two plasters and a cough sweet in the medicine cabinet I decided that I would try to get to the Pharmacy for some sort of support bandage.  Using the clutch was so painful that I drove all the way there in 1st gear rather than use it again.  I don’t know how many customers turn up wearing just one shoe and clutching an umbrella for support but the lady at the pharmacy was lovely and came rushing to the door to bring me a chair to sit on.  She took one look and said that I needed to go to ‘Urgences’ for an X-Ray as she thought it was broken.  She then lent me some crutches, helped me to the car, gave me a lecture on not driving, and asked if she should call the Pompiers to take me to hospital.  I actually burst out laughing at the idea of being driven to Perpignan in a shiny Fire Engine but she assured me that it is a normal part of their job.  I politely declined her offer and promised I’d get a friend to take me.

If ever you have an emergency, Phil is the person to ask.  As soon as I rang he dropped everything (seemed almost pleased to have an excuse not to go to the French Class with Jeanette!), turned up with a bag full of cold drinks, and off we set – and I much preferred being driven in a classic Audi convertible rather than a fire engine!

We were really impressed by the exterior of the hospital – shiny new building, manicured lawns and FREE parking, but inside it was another story; a poker-faced Receptionist, queues of people, a burly security guard and signs everywhere asking people not to attack the staff!  It reeked of smoke as there were groups of people (mainly the nurses) smoking right outside the entrance. Another ‘similarity’ to the UK health system was the fact it took 5 hours to get through the triage and X-Ray departments.  I was finally ‘signed out’ at 6.30pm by an enormous Russian doctor who spoke French with an even worse accent than me.  He said there was nothing broken but there was a bad sprain (is there any other kind?) and handed me lots of prescriptions to take to the Pharmacy. 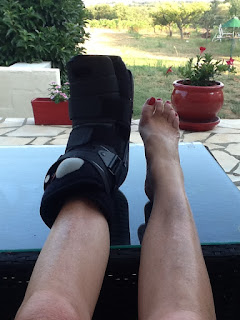 I left the pharmacy with enough painkillers to warrant a visit by the drugs squad, a pair of purple crutches, a number to call to get a nurse to call in and inject me every day for 10 days with something to avoid blood clots, an enormous ski boot (to fit my enormous foot), and advice to wear flat shoes.  Who says the French don’t have a sense of humour!

As I always try to look on the positive side of life I will just mention that over the weekend I noticed that I had lost my little ankle bracelet  - and now that I am wearing the natty ski-boot I don’t need it!

And as a final ‘foot-note’ (sorry!) many thanks once again to Phil and Jeanette for all their help – and particularly to Phil who carried my handbag as if he wasn’t at all embarrassed!
Posted by Caroline at 10:50 2 comments: